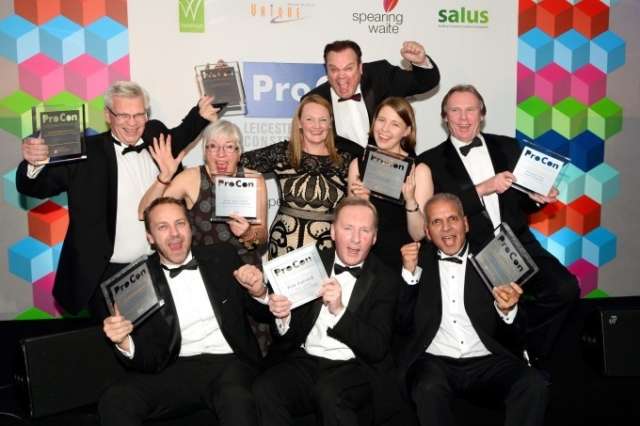 Fifteen new, refurbished and extended buildings are in the running to be named winners in the 2017 ProCon Leicestershire Awards.

Three photographers are also competing in a new category, for the best Architectural Image of the Year. They and the developers, architects, contractors and consultants who worked on the projects in Leicestershire and Rutland will find out on November 9 if they have won a coveted award.

More than 620 people will gather at Leicester’s King Power Stadium for the ceremony – the tickets for which sold out in a record two minutes after they went on sale in May.

The categories and their finalists are:

The Small Residential Scheme of the Year, sponsored by Infrastructure Investments:

The Large Residential Scheme of the Year, sponsored by Infrastructure Investments:

The Small Non-Residential Scheme of the Year, sponsored by Gateley:

The Large Non-Residential Scheme of the Year, sponsored by Gateley:

The Regeneration Scheme of the Year, sponsored by Pochin:

The photographers who are finalists in the Architectural Image of the Year are:

ProCon chair Pam Allardice, of the construction law firm Allardice Associates, said: “Each year I am deeply impressed by the standard of the projects that qualify as finalists. And this, our 15th year, is no exception.

“The projects have already convinced our expert judges of their merits. Now, in some of the categories, the members of ProCon get to cast their votes.

“Our thanks again go to our corporate sponsors, our new and existing category sponsors and all the sponsors who will make the ceremony the best possible celebration of the sterling efforts of everyone in the industry.”