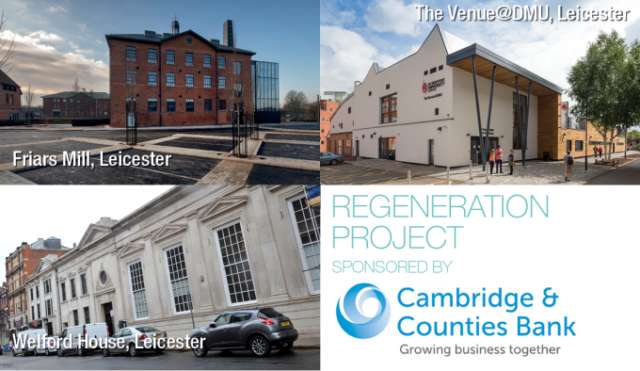 Three city projects which have breathed new life into redundant buildings are competing for the Regeneration prize in the 2016 ProCon Leicestershire property and construction awards.

In the running for the award are a waterside office complex, a law firm’s impressive new HQ and a university’s new events venue.

The category, sponsored by Cambridge & Counties Bank, is one of six in this year’s ProCon Awards. The ProCon Awards’ overall sponsors are Westleigh Partnerships, Salus Approved Inspectors, Spearing Waite and Unique Window Systems. The Leicester Mercury is the Awards’ media partner.

The Regeneration Project of the Year finalists are:

The Friars Mill project saw Leicester City Council purchase, restore and reuse of one of the City’s most important listed buildings.

Believed to be the oldest factory building in Leicester, Friars Mill was subject to a serious fire in 2012 which threatened the loss of this part of the City’s heritage.

The project saved the buildings, converting them to a prestigious and unique complex of managed offices in the heart of the City’s Waterside regeneration area. This scheme marks the start of the transformation of Leicester’s Waterside.

The Venue@DMU brought back into use the well-known historical building. Its large hall holds 1,000 people or be flexibly divided into three spaces. Full height glazing gives the building a light, open feel as well as a new identity.

The project is part of a campus-wide £136 million investment in refurbishments and new buildings as a catalyst for regeneration.

A derelict 1920s former bank building empty for a decade has been brought back to life as the offices for the Leicester law firm Spearing Waite.

Welford House was built as the headquarters of the Leicester Permanent Building Society. As well as the main part of the former bank building facing Pocklingtons Walk there is a three storey building facing Welford Place.

The 20,000 square feet of space is contemporary and energy efficient whilst respectful of the building’s heritage.

Steve Adams, Cambridge & Counties Bank’s Business Development Manager – East Midlands, said: “Being based in Leicester has helped us grow quickly thanks to the vibrant networks of property investors, businesses, brokers and other property professionals.

“We are delighted to be supporting the ProCon Awards which bring all those people and companies together to celebrate the very best projects, including the vitally important regeneration schemes which are doing so much to improve the built environment and local economy for everyone’s benefit.”

The winner will be announced at a November ceremony at Leicester’s King Power Stadium.

The other five awards are: