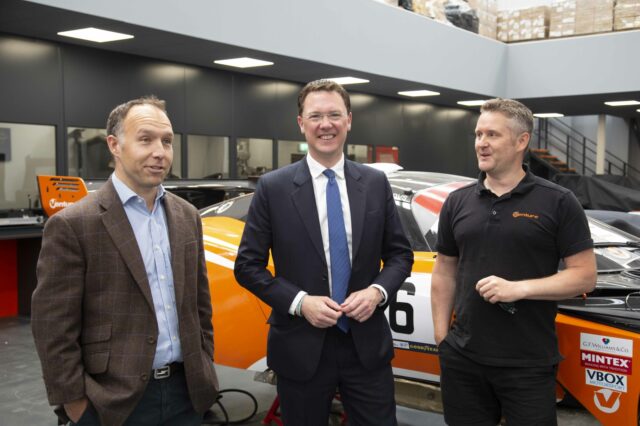 A local MP has visited the newly built Tungsten Park at Downs Road in Witney, Oxfordshire and met with two thriving businesses which have located their headquarters at the project.

Robert Courts, Member of Parliament for Witney and West Oxfordshire, was shown around the first 290,000 sq ft phase by the developer, Tungsten Properties. Phase 1, which totalled 12 buildings, is now fully occupied, with Phase 2 now under construction and which will provide a further four buildings totalling 168,000 sq ft and circa 150 jobs.

The company, which employs 150 people, produces a range of products including lights, filters, and heating and ventilation systems for pools, explained how they have met exceptional demand for their products during lockdown.

Mr Courts also met with Venture Engineering, which has customers in Formula 1 and moved from Bourton-on-the-Water in Gloucestershire.

While motorsport is their background, they explained to Mr Courts that they have moved into other sectors including transport, battery power, architectural and automotive.

Mr Courts met with Jeff Penman, managing director, Tungsten Properties, one of the UK’s leading industrial and warehouse developers and the company behind the scheme, who explained that they have agreed a £26.4 million forward funding deal with NFU Mutual for the speculative development of the final phase.

The four-unit scheme was granted planning consent in February 2022 by West Oxfordshire District Council and will total 167,800 sq ft.

Jeff Penman said: “We warmly welcomed Mr Courts to our project and thank him for taking the time to understand how we are building to meet the high demand from fast-growing companies needing manufacturing and warehouse space in Oxfordshire. Our decision to again speculatively build this project demonstrates our commitment to deliver further space to create not just immediate local construction jobs but also those for Witney and Oxfordshire through the companies who chose to move here and join the likes of Certikin and Venture.”

Warwick-based MCS Construction has commenced construction and the project is due to be completed by 24 March 2023. The final phase will bring the whole project to total approximately 470,000 sq ft.

With phase 2 underway, Mr Courts suggested that Tungsten Properties is to keep residents regularly informed on what and why activities are being undertaken on site, and any practical mitigation measures that can be employed.

Jeff Penman added: “We are keeping the local residents informed of the project’s progress and are implementing mitigation such as the crushing of natural stone for reuse as type 1 stone for reuse within the development. The crushing is being deliberately undertaken behind spoil heaps to provide an acoustic barrier to the nearby homes, and the reuse of the natural stone is to negate the need for 500 lorry loads of imported quarried stone, and 500 lorries exporting surplus material, thereby providing a more sustainable solution.”

Robert Courts MP said: “It was a pleasure to visit Tungsten Park in Witney recently to learn more about the new site and see some of the businesses based there. It was clear to see how this well-positioned site is supporting local jobs and productivity, and how the Tungsten team has worked with local businesses to provide bespoke spaces that meet individual business needs.

“It was also useful to learn more about Phase 2 of the site which is currently in development, and to discuss the importance of appropriate mitigation being put in place to support nearby residents as the site is built.”