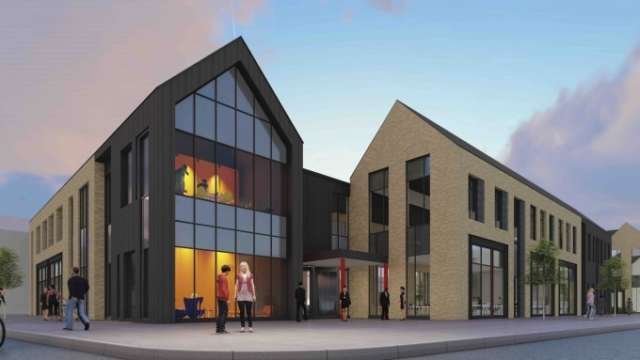 THE ambitious redevelopment of Leicester’s once-neglected Waterside area has reached another major milestone, as work begins on the first new office complex in Frog Island.

Over the last three years, Leicester City Council has been working with its development partner Keepmoat Homes to acquire and prepare the 7.3-hectare site earmarked for the first phase of the Waterside development.

Keepmoat has contracted Leicester firm Brackley Property Developments Ltd to construct the first of three proposed office buildings, which will provide a combined total of over 55,000sqft of new workspace.

Brackley has now started work to build the new office building on the corner of Soar Lane and the A50 in Frog Island.

The new building will provide 17,000sq ft of office space. It has been designed to reflect the industrial heritage of the Waterside area and will feature a distinctive metal roof and a full height glazed front to the three-storey building.

Construction is expected to take around ten months to complete.

The new office will be the first part of the commercial development of the Waterside area, following Leicester City Council’s acquisition of the land and buildings in the area. The council, through its development partner Keepmoat, has so far invested around £5million in clearing and remediating the site ready for development.

Keepmoat will also build over 350 new homes, along with parks and green spaces, as part of the wider redevelopment of the area. It is anticipated that construction of the first of the new homes will begin by early summer.

Brackley Property Developments Ltd recently worked with the city council to complete work on the award-winning Fabric and Riverside office buildings in the grounds at Friars Mill.

Stephen Pedrick-Moyle, managing director of Brackley Property Developments Ltd, said: “We are thrilled to be starting work on the first new commercial property development as part of the redevelopment of Leicester Waterside and are looking forward to welcoming new businesses to take up space at this key regeneration scheme.

“In line with current Government advice to the construction industry, our contractor Stepnell will be operating the site under strict guidelines and procedures published by the Construction Leadership Council. These align with the latest guidance from Public Health England and will be under continual review.”

City Mayor Peter Soulsby said: “The start of work on the first new offices as part of the Waterside marks an important milestone in the transformation of this long-neglected part of the city.

“After several years of planning, negotiation and site preparation, we are now ready to see this important area of the city begin its transformation into a thriving new neighbourhood and a great place to live and do business.

“In these challenging times, it is vital that we continue to invest in the city’s economic prosperity and future growth.”

The first phase of the Waterside redevelopment will represent around £75million of private investment into the area. This is addition to around £15million of capital funding from the city council and a £20million allocation from the Local Growth Fund, a pot of government funding awarded to the Leicester and Leicestershire Enterprise Partnership Limited (LLEP) for projects that benefit the local area and economy. Leicester Waterside is located within the Loughborough and Leicester Science and Innovation Enterprise Zone.

Kevin Harris is Chair of the LLEP Board of Directors. He said: “This development at Leicester’s Waterside marks a major investment for the LLEP. It’s wonderful to see the plans coming to fruition, after several years of planning.

“Of course, the buildings themselves aren’t the end goal of the development, and I’m really looking forward to meeting the companies that will move into these new premises. The thriving businesses that will occupy this site will create a new centre of commercial activity in Leicester, bringing jobs and prosperity to our city and the wider region.”