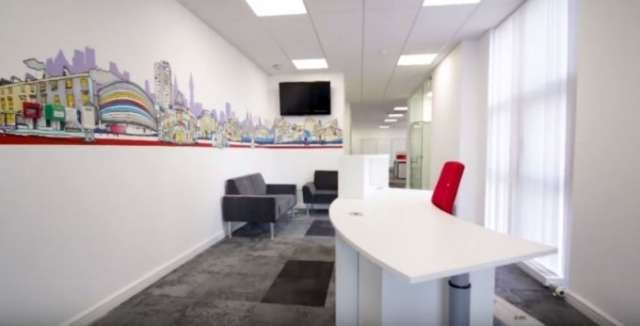 Empty space has been transformed into bright and spacious offices for Innes England’s Leicester-based team.

The commercial property agency has moved into Peat House, in Waterloo Way, Leicester – a stone’s throw away from its former home in De Montfort Street, where it had been located since the company was formed nearly three decades ago.

Innes England modernised the 1,738 sq. ft. vacant workplace, which is located on the second floor of the Grade A office building. The new office will be used by staff based in Leicester – as well as Innes England’s wider teams in Nottingham and Derby – thanks to a number of new hot desks.

The firm’s building consultancy team creatively designed how to make the most of the space with an attractive and imaginative layout, before appointing Nottingham-based Redrock Interiors to create a vibrant and welcoming workplace.

The in-house team has also installed quirky features such as a mural of iconic Leicestershire buildings selected by Innes England staff, which was painted onto the crisp white walls, and a mini putting green.

Mike Thorne, head of building consultancy at Innes England, said: “There is a bit more pressure when designing and project managing an office fit-out for your own company but it worked out perfectly in the end and it’s a project the team is really proud of.

“The building consultancy team deals with refurbishment projects and move management all of the time – it’s our job – so we felt really comfortable working with our colleagues at Innes England to create a suitable environment for the team.

“The finished product is exactly how we envisioned it would be – it’s lively, roomy and contemporary and a great space to work in.”

The move was planned to provide Innes England’s Leicester-based team with a more suitable, open plan working space. Peat House, regarded as one of the city’s most prestigious office buildings, is located within the prime office core, opposite the train station.

Innes England will be sharing the building with accounting firm KPMG and Bellrock Facilities Management.

Peter Doleman, director of Innes England, said: “I am delighted with what we have achieved; we had been successfully ensconced in De Montfort Street for many years, but the time was right for us to move to a prestigious new building within the city to better reflect the profile of the business and to help us provide the level of service now required by our clients.”

Nelsons Solicitors assisted with the legal aspects of the move from De Montfort Street to Peat House, co-ordinating the termination and start of the property leases.

Innes England’s building consultancy team has been involved in a diverse range of projects across the East Midlands since it was established in 2010 – including working with PKF Cooper Parry and Pendragon on the project management of their office moves.